About Australia's Manuka and Tyagarah Apiaries In true Byron Bay style, Founders Michael Howes and Katrina Evans met on the dance floor at the Beach Hotel in 1994. Both Michael and Katrina moved to Byron Bay to enjoy the natural beauty and inspiring alternative community of the Northern Rivers region.

In 1996, they established Tyagarah Apiaries selling bioactive honey produced from the native Leptospermum plants found growing in the coastal forests which were colloquially known as Jellybush. In time Tyagarah Apiaries thrived and grew to become the company Australia’s Manuka.

It was an unforgettable encounter that inspired the name change from Tyagarah Apiaries to Australia’s Manuka. Katrina and Michael were bushwalking near one of their apiaries with their good friend and Maori elder Cheryl Livingstone. Cheryl saw one of the flowering trees that the bees were collecting nectar from and exclaimed happily “I’ve found some Manuka”.

Her response was immediate and decisive. “Don’t tell me what it is, it’s Manuka” she said in her signature no-nonsense way.

The flowers Cheryl had identified were Leptospermum plants that were close cousins of the variety that she was familiar with from New Zealand. Upon early testing in independent laboratories the bioactive honey proved to be even more potent in the medicinal properties than their New Zealand counterparts. Thus, the Australia’s Manuka brand was born.

Both Katrina and Michael grew up in New Zealand immersed in nature and the outdoors.

Katrina and Cheryl lived in the same small town and attended the same schools in New Zealand. At the time when Cheryl discovered the “Manuka” plants in northern NSW, Katrina and Michael had been living in Australia for some years. Katrina reconnected with Cheryl in beautiful Byron Bay where she was also living.

Katrina recalls that Cheryl loved to go walking in the nature reserve near their apiaries looking for bush medicine. Cheryl was happily surprised when she found the “Manuka” plant growing there.

Back in New Zealand Michael recalls that the farmers used to put Manuka honey on the cow’s udders when they had mastitis. Now we understand that the cows were benefitting from Manuka honey’s potent antibacterial properties. Many years and much research later, modern science has discovered that Manuka honey is one of nature’s greatest antibiotics.

Honey has always been prized by ancient cultures from around the world for its healing properties. Scientific research has found Manuka honey has additional antibacterial properties far greater than most other honeys.

Australia’s Manuka bees collect this honey from the unique varieties of Leptospermum plants found in the pristine coastal forests of the Northern Rivers region.  The nectar from these plants gives Australia’s Manuka honey a distinctive, rich and delicious flavour as well as providing potent medicinal benefits.

The delicate flavour of Australia’s Manuka honey makes it an exceptional and rare bioactive honey which is just one of the reasons why it is sort after worldwide.

In 1977, Michael came over from New Zealand to Melbourne to study Natural Therapies. Michael kept bees in New Zealand and had a lifelong fascination with bees inspired by a beekeeper that he often visited on his way home from school.

After a year of living in Melbourne Michael was drawn to the country outskirts of the city where he could be closer to nature and once again started keeping bees.

When he came to Byron Bay he was living in Tyagarah when he found some old bee boxes belonging to a local farmer and fixed them up. One day a swarm of bees flew over the garden, and he followed them with the boxes to capture the swarm.

Michael explains the process: The natural way bees create another colony is when the old Queen takes off and leaves the hive with some of the bees to look for another place to live. Each bee eats some honey before they leave the old hive to find their new home. They are often quite docile during their journey because they are full of honey and not trying to defend their home territory. When Michael found a swarm hanging on a branch, he shook them into a box, and so began the first colony. Soon one hive became two hives and soon he found that he had too much honey. Tyagarah Apiaries began collecting bioactive Jellybush honey and later evolved into the company Australia’s Manuka producing premium MGO honey. 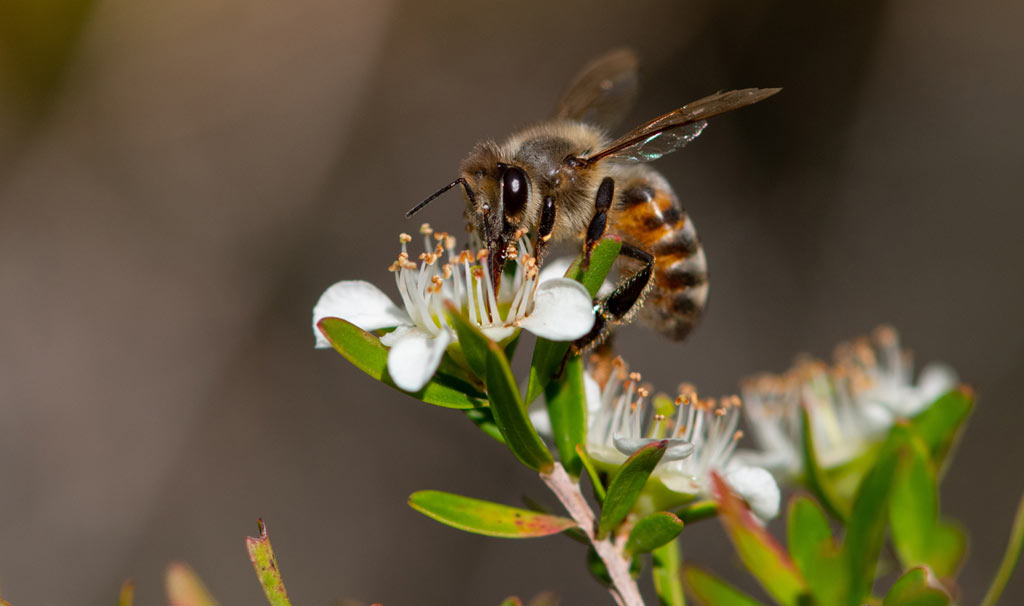